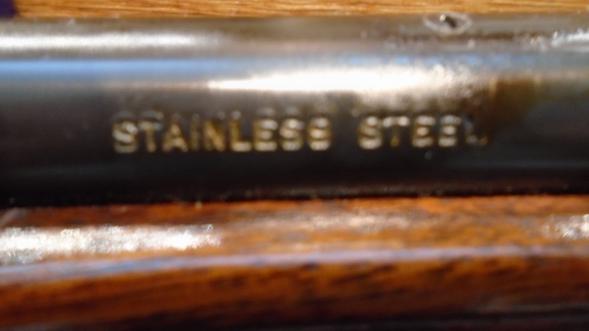 Marlin built some 5,000 of its semi-target Model 322 rifles in .222 Remington on Sako L46 actions in the early to mid-1950's.  The 322 gained a reputation (perhaps unwarranted) of its MicroGroove barrel wearing out prematurely.  In response, Marlin brought out the upgraded Model 422 with a blued stainless steel barrel to resist wear.  However, Marlin soon got out of the bolt rifle business and only 354 of these "Varmint King" Marlins were produced, according to Col. Brophy's book:  https://books.google.com/books/about/Marlin_Firearms.html?id=a9XL74ykUykC

Upgrades from the earlier Model 322 include a slimmer sporter stock with Monte Carlo and full checkering; a lighter weight sporter barrel of blued stainless steel, and a plastic grip cap.  This example is in very good condtion and shoots very accurately in the test-firing we did.  The Marlin "Bullseye" is present in the stock butt, and the finish shows very little wear.  The finish may have a well-done extra coat of varnish, but we can't say for sure.  The only detraction is that it has been drilled and tapped for a barrel-mounted target scope.  The holes in the barrel are filled with filler screws, while the holes in the front dovetail will cover with scope mounts.  Both Sako enthusiasts and Marlin enthusiasts regard this rare rifle as one of Marlin's best efforts.